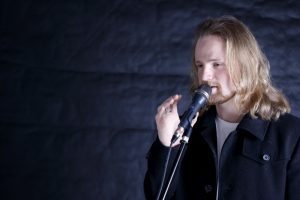 Richard Stirton, hails from the vibrant suburb of Rondebosch, Cape Town.  Richard poured all of his focus into sport before turning to music after several sporting injuries halted his sporting progress. Richard’s first solo performance was in the Rondebosch Boys’ High Cabaret when he was 17. After dabbling in theatre, Richard enrolled at the University of Cape Town to commence a degree in Business Science.

Music, however, was something that he couldn’t quite give up. Come 2014, Richard decided to take gap year to pursue his passion for music again. During this time, he worked at Stardust Restaurant as a “singing waiter” for the year and began playing solo gigs by the end of that year. The following year he entered The Voice South Africa, on the encouragement of his friends and family, and after being coached by Kahn Morbee (Parlotones), Richard took the coveted first prize.

Following the show, Richard signed a lucrative record deal with Universal Music and has been thrust into music video shoots, writing and recording his first few singles, photo shoots and interview after interview with the media. Richard’s musical influences include Matt Corby and Bon Iver and has released his debut album called “Middle Ground” produced by Denholm Harding. His album has top the charts #1 on iTunes. Richard has had countless hits since winning The Voice SA and has already earned his first major accolade of an iTunes #1, with his rendition of Simon & Garfunkel’s The Sound of Silence, from the hit show. In July we received word that A panel chose the top 23 winners of The Voice internationally, and SA The Voice winner, Richard Stirton made it to No.1. Since winning the Voice he has performed with South Africa finest from Khan Morbee, Lady Smith Black Mambazo and host of other great artists.

Richards impressive voice immediately caught the attention of internationally renowned mic and headphone brand, AKG, who approached him to represent the AKG brand in South Africa as an endorsee and brand ambassador.