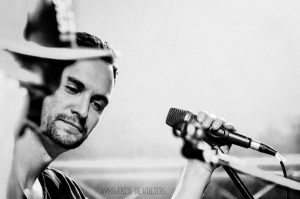 Jesse Clegg is a South African Singer-Songwriter whose three studio albums, When I Wake Up, his 2011 follow up Life On Mars, and his latest album, Things Unseen, have made the 27-year-old a platinum-selling success in his home country.

After the widespread acclaim of his first album, Jesse’s music caught the attention of 3-time Grammy-winning Canadian producer David Bottrill (Muse, Tool, Placebo). Jesse subsequently moved to Toronto for 4 months to work with Bottrill who produced his second album. Life on Mars was recorded at Metalworks Studios in Mississauga, Ontario. Another notable contributor was Grammy-winning engineer Bob Ludwig who mastered the album in New York.

In 2014, Jesse brought his music to the International stage. He embarked on a seven-week tour across the United States and Canada, which comprised of 32 shows in 31 cities. He has also played numerous high profile showcase festivals in the U.S. – including the CMJ Music Marathon, New Music Seminar, and the CBGB Festival. On June 14, 2014, Jesse performed on the main stage at UK’s Isle of Wight Festival.

2015 saw Jesse returning to studio to record new material for his 3rd studio release, entitled Things Unseen. Produced by SAMA nominated Denholm Harding, the first single, Use Me, was released in July, and immediately started charting on national radio, reaching the No. 1 spot on several stations. It remained in the iTunes Top 40 for 3 months.

The 2nd single, Souvenir, was released in December, and the album was launched in June 2016 at a sold out event in Johannesburg. The album debuted in the iTunes Top 10 albums chart. The latest single Breathing features a collaboration with one of South Africa’s hottest young acts, Shekhinah. It has met wide-spread acclaim and high rotation play-listing on National stations. It was the 2nd No.1 single off of the album. Jesse has recently returned from his 2nd North American tour, where he played 36 shows across the continent from 17 March to the 1st of May 2016.

The son of iconic South-African musician Johnny Clegg, Jesse spent the first six years of his life on tour with his father. He has released six Top 10 singles and toured extensively throughout South Africa. As an official ambassador for the Nelson Mandela 46664 Foundation, Jesse was invited to play at Radio City Music Hall in New York for the annual Mandela Day Concert. He has been nominated for three South African Music Awards.